Orchids have some of the most beautiful flowers in the world. If you are to successfully grow orchids at home then you must reciprocate its natural environment. Quite a number of people find growing orchids rather difficult and somehow this is understandable especially given the fact that the plants will only grow if you replicate its natural habitat. So what is the secret to growing healthy orchids at home? You must use the right potting mixture. And, in this post, we have reviewed 6 of the best potting soil for orchids. This is one of those long posts, you might want to grab some coffee as and get comfortable least assured that we shall leave no stone unturned.

Don’t let the name soil misguide you to using normal garden soil. One of the most challenging things when growing orchids is finding the right orchid soil. Unlike terrestrial plants, orchids don’t grow in normal soil. If you do so, they will die in a couple of days.

Factors to consider when purchasing the best potting soil for orchids

There are over 2,000 orchid species and given the fact that all come from the same plant family, they share lots of similarities. However, this is not without some differences. Some orchids required specific types of orchid soil whereas the vast majority share a relatively similar profile.

You can either opt for organic or inorganic orchid soil. Though the two will serve the same purpose there are always added advantages if you go organic. The obvious advantage is that organic orchid soil is rich in nutrients. But, unlike terrestrial plants, orchids don’t thrive well in decomposing matter. For this reason, you should avoid using organic components that decompose fast; report the orchid on the first sign of decomposition.

Orchids are very adaptive plants, as long as you take care of the roots the plant will adapt to just any environment. One might wonder; how does region get to do with best potting soil for orchids? Well, for countries with 4 seasons, not every orchid soil is suitable to use on winter or during summer.

Never limit your options to price alone if you want healthy orchids. It’s for a fact that different soil for orchids vary when it comes to price. Expensive doesn’t always mean high quality. In our review, we have mixed up things to ensure that we cover different spending habits.

What makes up soil for orchids?

Orchid soil isn’t your day to day garden soil. In most cases, this is a mixture of materials. What are some of the materials that make up soil for orchids?

Fir barks are the most used grow mediums and this is attributed to the fact that they are readily available and inexpensive. They are organic meaning that they provide essential nutrients to the plants. Fir barks are well aerated and have excellent drainage. Little moisture is retained and this means that you have to water the orchids every now and then. Ensure that you report once every 1 or two years since fir barks decompose rather fast.

This is basically volcanic glass and resembles small sugar granules. Perlite is inorganic meaning that it doesn’t decompose or compress. For effectiveness, it is mixed with organic mediums that decompose fast.

If you know a thing or two about growing orchids then the word sphagnum moss is not new to you. Sphagnum moss is quite popular due to its high water retention and excellent aeration. However, it should be mixed with a non-organic compound due to the fact that it decomposes fast.

Lava rocks don’t rot or decompose. They drain just fine and come in different sizes. Here is the deal with the size of the rocks, large rocks have more air spaces but retain little moisture in it. Opt for medium-sized lave rocks for effectiveness.

Unlike other grow mediums in this list; coconut husks and fiber are lightweight. This is also one among a few organic compounds that don’t decompose fast. Coconut husks are well aerated; it is mixed with coconut fiber to get the desired water retention capacity ideal for growing orchids.

6 Review of the best potting soil for orchids 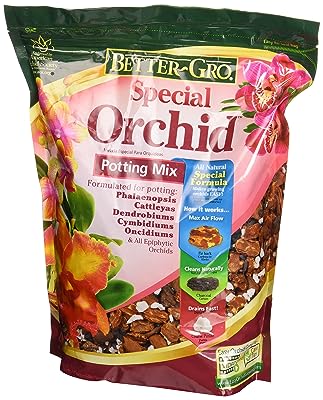 There was no better candidate to take up the number 1 position other than Sun Bulb 50000 Better GRO Special Orchid Mix. There are only a few potting mixtures that are suitable to use on all orchids and Sub Bulb makes the cut. It is multi-purpose and suitable for growing phalaenopsis, cattleyas, oncidiums, dendrobiums, paphiopedilums, and epiphytic orchids.

Sub Bulb 50000 Better Grow Special Orchid Mix is a combination of hardwood charcoal, sponge rock, and west fir barks. The mixture comes ready to use and there is no need to add anything. The drainage is excellent and you can be least assured that the roots will be well aerated. 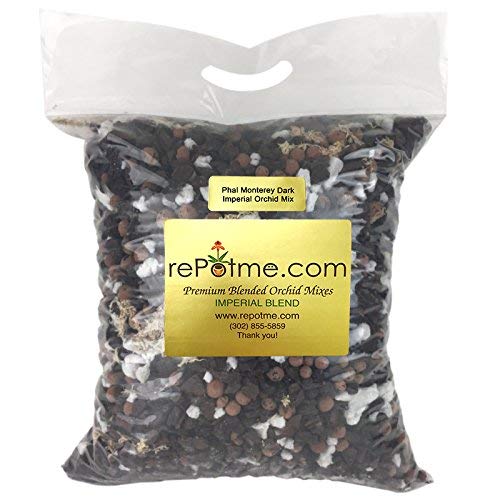 Phalaenopsis Monterey Bark Imperial Orchid Mix is a combination of large sponge rocks, sphagnum moss from New Zealand, hydroton and Monterey pine bark. The mixture is dark in color with Orchiata Monterey being responsible for the color.

The mixture retains enough moisture to sustain the orchid least assured that the roots are also well aerated. The particles are medium-sized ideal for young and mature orchids. 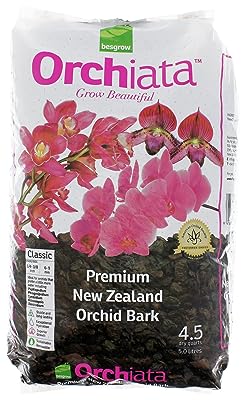 It is made from 100% pure New Zealand Pinus Radiata Barks that contains living micro-organisms to help protect the orchids against pathogens. And, as we all know, when the roots get infested with pathogens they will start rooting and eventually die.

When you use BestGrow Orchiata Orchid Bark, there is less need for reporting since the mixture doesn’t decompose. As if that’s not enough, the potting mixture never accumulates salt so you can worry less about flushing. 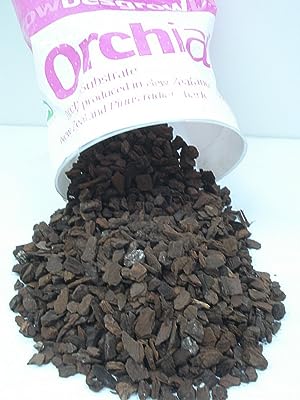 New Zealand has never disappointed when comes to making quality products and Orchiata New Zealand Pinus Radiata Bark is no exemption. This is among a few potting soils for orchids that provide nutrients.

It is free from toxins and pathogens so you can worry less about infestation. The surface is slightly rough to help anchor the roots of the orchid and provide stability. Compared to other brands Orchiata New Zealand Pinus Radiata Bark is expensive. However, it comes in 5 different sizes. 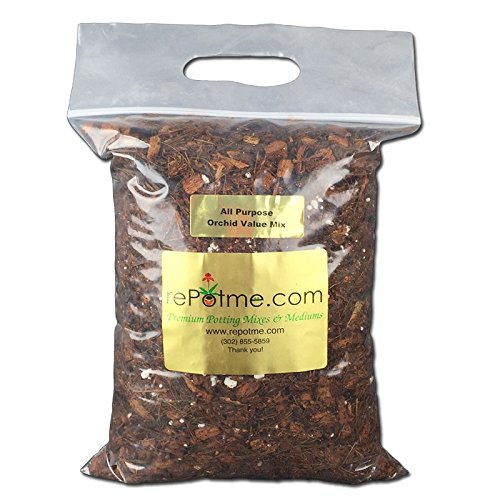 As the name suggests rePotme All Purpose Orchid Mix is suitable to use on all orchids species. This attribute is rare even for the best potting soil for orchids making it a darling to many orchid growers.

The mixture is 100% organic and contains no soil medium; rather it’s a combination of perlite, fresh coconut husks, and coir. rePotme All Purpose Orchid Mix boasts of having superior drainage and water retention capacity. All these are necessary to ensure that your orchids grow healthy without fear that the roots might rot or die.

There is no need to add anything, the mixture is ready to use once you buy it. 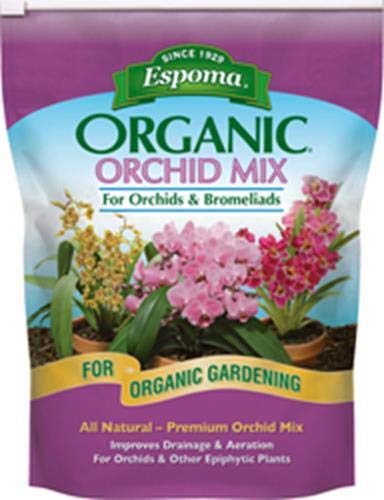 Why use orchid soil and not normal soil for growing orchids?

Orchids are very sensitive when it comes to moisture, aeration, and stability. Ordinary soil drains rather slowly and this is a problem to the orchids since the roots will start to rot and eventually die.

Orchid naturally grows in places with high rainfall, the same should be reciprocated when growing orchids indoors. The only problem with this is that orchids require plenty of water but not stagnant water. The best soil for orchids should have excellent drainage however it should retain moisture. Watering orchids is one of the most difficult skills to master especially given the fact that you have to hit the balance between too much moisture and enough moisture.

One might argue that garden soil is well aerated of which is true. However, it falls short when it comes to orchids. These beauties required free circulation of air in the failure of the root to which they will rot. Well, in other words, it fair to say that normal soil is well aerated but not good enough to grow orchids.

Orchids tend to have rather shallow but compact roots. The orchid soil that you use should be in a position to provide stability. Just like any other plant out there, when the roots flourish the plant will grow healthy and strong.

How do you sterilize orchid potting mix?

As much as orchids are highly adaptive plants they are susceptible to diseases, bacteria, and viruses. One wrong move and the plants will die. Whether you are reporting, got an orchid as a birthday present or purchased it from the supermarket one thing is certain, you have to sterilize the potting mix. This is irrespective of whether you ordered it online and it is written ready to use. But, how do you sterilize orchid potting mix? Well, it is very easy. Soak the mixture in boiling water for 2-3 hrs and you are good to go. And yes, it is that easy.

It is my hope that you found this post useful and informative. Orchids are very sensitive plants and they should be grown in the right medium. In this post, we have reviewed in details 6 of the best potting soil for orchids. We understand that deciding on what’s best for your orchids can be overwhelming at times. Our top pick for this was Sub Bulb 50000 Better Grow Special Orchid Mix. Show some love by sharing this post with two of your friends.

Hi All,
Welcome to Let’s Tend the Garden!
I’m Helen Reed, founder of Letstendthegarden.org. Here is a place where backyard enthusiasts and lovers of gardening can gather to find the best content on the web (we think so, anyway).
Enjoy!

It is important to also note Letstendthegarden.org is a participant in the Amazon Services LLC Associates Program, an affiliate advertising program designed to provide a means for website owners to earn advertising fees by advertising and linking to Amazon.com, Amazon.co.uk, Amazon.ca, Endless.com, Smallparts.com, Myhabit.com, and any other website that may be affiliated with Amazon Service LLC Associates Program. We do not specifically market to children under 13.

Letstendthegarden is reader-supported, when you buy through links on our site, we may earn an affiliate commission at no additional cost to you. This does not influence our opinions, but we believe in transparency so you can make informed choices. Learn more